The last few decades have seen the surfacing of a hotbed of cutting-edge electronic prowess and creativity coming from the winter wonderland that is Sweden. With some of the most recognised electronic producers and Dj’s out there being from Sweden, one would only expect the Swedish electronic labels to follow suit. And follow suit they did. Amongst an already saturated industry and rife competition, one label that truly stands out is Studio Barnhus.

A basement in Kornél’s hometown became available when he was looking for a permanent spot to produce his music and thats when luck struck. Fellow Swedes Axel Boman and Petter Nordkvist, known DJ’s at the time wanted to move into a new place and the three-man basement on Barnhusgaten (orphanage) street was soon to become the prominent label that is Studio Barnhus. The mind has not to wonder where the name of the studio was procured.

It is clear to see that this young prodigious vanguard of producers making Studio Barnhus are by no means looking to fit into the ordinary or conventional bracket of music. All aspects are as organic as it gets, and producing in their old-school Stockholm studio allows them to experiment with different tools and techniques, making for some of the most unique music that ears have heard for years.

Three young Swedish producers all driving in the same direction, with the same vision: To create the music they love and share it with the people of the world, and whilst many would think three a difficult number, these young dudes manage not only to make it work, but bounce ideas off each other and create projects that have drawn such attention to not only themselves as individuals but a label as a whole. With each and every member fusing different genres together, the groups dynamic continues to thrive in its nascence and the only possible direction for this trio seems to be up.

Stockholm is kind of small, you know, so if you’re playing the same music, you’re going to end up meeting sooner or later.

Deviating so far from the musical norms one would expect on a house label, Kornél, Axel and Petter have together formed a ‘Scandinavian sound’ with their abnormal sounds and their originality for which so many can relate. All three compliment each other in so many different ways, it is evident that these three leading the charge from Sweden are going to continue impacting the game, and nobody is going to tell them otherwise.

We salute you Studio Barnhus. 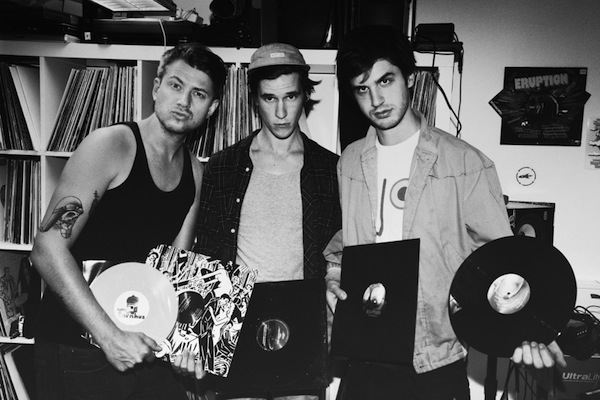 Each and every one of these dudes making up Studio Barnhus will be performing together at theBasement and La Darsena’s Music Port Fest this coming July on the 5th and 6th. Kornél, Axel and Petter will all be playing on the electronic stage, exhibiting only their best in the port of Segorbe, alongside Steffi and Virginia and our very own local selectors theBasement Soundsystem.

Dubbed one of the twenty best Dj’s in the world by Mixmag, this Swedish powerhouse has made quite the name for himself, and being at the helm of Studio Barnhus, one can only imagine how undeniably bright the future is for this gifted fellow. Exposed to his parents’ record collection at a young age, Kornél played his first Drum’n’Bass gig at the young age of fourteen, kickstarting his affair with electronic dance music.

After this saw an arid period where Kornél didn’t play for a few years, however when he reached the legal age to enter clubs, he again picked up the headphones and started playing house music instead of Drum’n’Bass. By this time, Kovács had become quite the household name both in his hometown and his country, holding a residency at Paradise club then moving onto the Red Bull Music Academy, which would later take him to the next level in his musical escapade.

There’s never a time when this guy isn’t busy, he’s either cooking up something new in his Stockholm studio with his partners, or playing sets across the world. He’s playing at the famous Stealth in Nottingham, Liverpool’s 24 Kitchen Street and A La Folie in Paris over the next few months which just goes to show that this guy gets booked by the best of the best.

A true genius and unique character, Axel has made a splash in the musical world through his weird and unorthodox sounds, accompanied by his very likeable character which is ever-present on his Instagram. Where so many lack charisma and personality in the industry, Axel’s true character can be seen not only on his Instagram, but also in his sets and interviews, where he comes across as this young vibrant musician who rarely takes himself too seriously and loves to have a joke.

Having days with a synth melody stuck in his head accompanied by five or six samples is the mixture with which Axel manages to constantly produce fresh catchy music, and he does it so well. Not being a classically trained artist, it seems that Axel takes this and uses it to his advantage. Where trained artists search for that catchy hook or melody that fits a track, Axel experiments with different samples until something clicks.

The loose and fun styles of this art-school grad make him an infectious figure musically and a refreshing one personally. A quirky sense of humour and compelling character that compliments his talent behind the decks makes for heavy artillery when competing against other huge names in the business, however we doubt that this is Axel’s intention. His humility is evident and he really is just producing to make the music he loves.

They read my mind! ?

Take a moment to soak up your surroundings if you hear “1979” played at Dias de Campo in a lengthy DJ set, and the memory won’t soon disappear. This is but one of many of Axel’s songs that would accompany the serene halcyon surroundings that the mountains of Montanejos offers in just some of its many peaceful aspects. As much as the track holds you in a starry-eyed stasis, the song also tickles and prods you to get your groove on.

The last and by no means the least cardinal component that makes Studio Barnhus what it is is Petter Nordkvist, and with a slightly different production style to his two partners, he manages to distinguish himself from the rest with his own sound. With a diverse young talent that you’d struggle to find anywhere else, Petter is going from strength to strength as he continues to exhibit his raw talent not only through playing at gigs, but also his prowess within production in the studio.

Petter’s reputation has been building as quick as ever over recent years and has held quarterly residencies at Border Community’s label nights at Turnmills in London, and with mixes and productions known for fusing techno, electro, dub, ambient, acid and deep house, he has managed to create his own sound which is unsurprisingly easy on the ears, and concertedly with Axel and Kornél, this trio are a force to be reckoned with, and will be for a lifetime.

Here are some of Studio Barnhus’ best so far. Expect more to come:

Sofia Kourtesis – Home Is Where I Can Dance

Big things are coming from this beat laboratory, so keep an eye out.