Inicio News Women who thrive in the house music scene

The electronic house music scene…an industry where female DJs are not often put on the front of the stage. Yet, women have been in it and stepping up to the plate for many years now, they have been drawing crowds on the dancefloor and at the world’s biggest festivals. Women have something very special when it comes to making music, and it shows.

Starting with old school Divas.
The first ladies of House.

A handful of female artists have actually been pioneers of the house music milieu. They are singers, producers, DJs, and musicians. They have helped with the development of music and have taken risks by fighting to assert their rights. They simply have been part of history. So let’s go back in time and look at the impact that these extraordinary women have had on house music. Songs that we have sung to, danced to, cried to, but most importantly, songs that will always remain etched in our hearts. Be ready to jump into the late 70s-90s.

American singer Donna Summer wrote the lyrics to what became “I Feel Love”. She recorded the voices in one session and never thought it would be a hit song, only that it would be part of a good album. The song is sent to Neil Bogart, founder of Casablanca Records, the first single will be “I Feel Love”. Donna plays the disco diva like no one else. With her significant debut in the mid-70s and her collaborations with Giorgio Moroder (Italian composer and disco producer), she clearly dominated disco and sold over 140 million albums worldwide during her career.

Everybody remembers that famous “La da dee la dee da, La da dee la dee da” from the timeless classic “Gypsy Woman” sung by Crystal Waters. Originally an office worker for the DC government, Crystal was also the daughter of a jazz musician and the niece of famous female vocalist  Ether Waters. Surrounded by the music world, Crystal was quickly propelled to the top of the club charts at the beginning of the 90s.

“some people would boo us saying House music wasn’t real music. It was a real struggle to get out of there.”

Another recording artist goddess is Ce Ce Peniston. Born in Dayton, Ohio, she was first a beauty queen and got elected as Miss Black Arizona in 1989. Cecelia Peniston signed with former A&M label (now Universal Music Group) and made a roaring debut with the single “Finally”, one of the greatest international hits of 1991. The track was ranked No.5 in the U.S. sales and No.1 in the dance category.

One of the greatest voices in the house is also Robin S, an American singer, and songwriter that marked the 90s. “Show Me Love” is probably the most famous song by Robin S. A song that has been sampled, reworked, and remixed more than a dozen times by artists, bands, and DJs from different countries almost 20 years after its original release. Did you know that this track, which the world is familiar with is, in fact, a remix from a song formerly created in 1990 “Show Me Love-Montego Mix.” The vocal is indeed the same, but its deep trademark synth hook we’re all used to or its melody is actually very different. It’s a cheerful disco track with funky electric guitars in the background.

And the hit you’re undoubtedly familiar with: Robin S – Show Me Love (1993)

23 years ago, in the spring of 1997 came out a house and women’s anthem that resounded on the radio and in the clubs. “Free”. A cult release from Strictly Rhythm, but essentially a song with gloomy and incredible guitar riffs that became the biggest hit of the American singer Ultra Naté who already began her music career at the early age of 21.

We gotta keep in mind that the list of these goddesses of the house music is far from being complete. There is a multitude of other female artists. Barbara Tucker, singer in the everlasting “I get lifted,” “Beautiful People” or “Deep Inside”. Then, of course, we have the endlessly fearless voice of Inaya Day you probably heard in “Pushing On”, or the soothing and at the same time playful voice of Monique Bingham in “We had a thing”. Their songs have been played on a loop by international radios and have surely shaped the house music of today. Without the Divas, would there even be house?

Now let’s dive into another era, the glorious 2000s, and the rise of plenty of other female artists in the house music industry. During these years, there are still a good number of female artists who prove to us that this element is not only for men. If the clichés of the “DJ wannabe who uses her aspects to break into the scene” persist, little by little, women made their mark with their talent. And it’s better this way!

Heading first to the UK, where, every Friday from 7 to 9 pm, presenter and DJ Annie Mac hosts her own show on BBC Radio 1: Annie Mac’s Mash. Annie Mac is not strictly speaking a DJ, yet the Irish woman plays an influential role in the world of house. Indeed, she is the one who programs all the new electro/house trends in Great Britain, which are then listened to and broadcasted all over the world!

Let’s now go on a trip to Germany. It’s in its capital that the undeniable figurehead of the Berlin house scene, Cinthie, becomes one of those DJs whose reputation is well established. An irreplaceable resident of the famous Watergate, a regular at the Boiler Room, she also runs three record labels 803 Crystal Grooves, Beste Modus, and We R House. Labels that are intended to be a beam of light for music lovers, delivering a punchy creativeness from house to deep and minimal. Cinthie’s musical influences come straight from Detroit and Chicago’s house. Cinthie’s intuitive ability to weave deep-yet-bassy mixes has made her an icon of the new generation of German house music. She also runs and manages a record shop under the name of Elevate. A real superhero and a true inspiration for us. 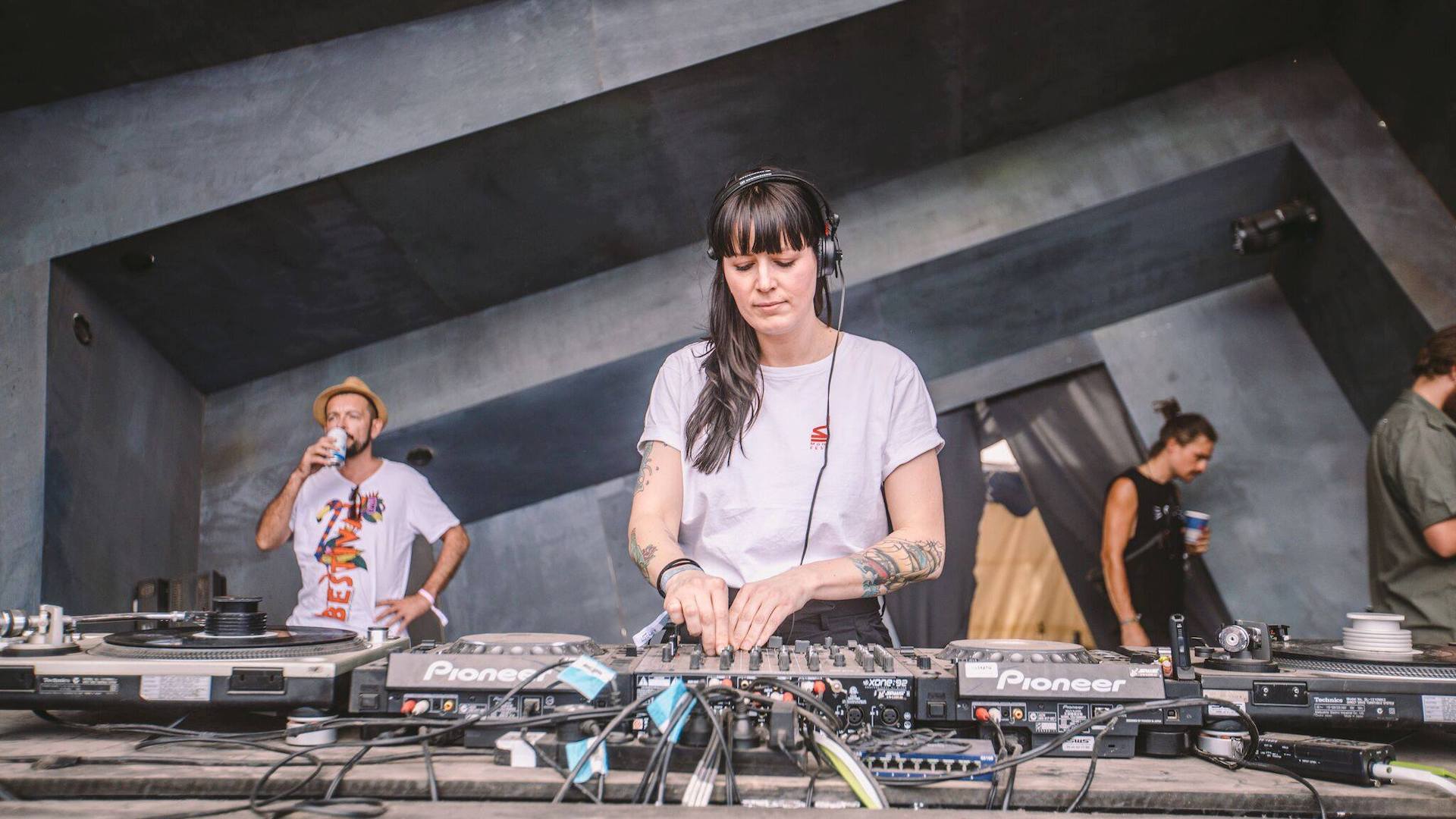 Still in Germany, we have tINI, a DJ which is again coming straight from Berlin and that has overflowing energy which is 100% felt in her music. A music style close to minimal house with tropical percussion and feels. After having trodden the soil of Ibiza, she created the “tINI of the Gang” and then “Part of the Gang” evenings in South America.

Other german-based female DJ’s have made it to the top. Virginia and Steffi, both resident DJ’s at the Panorama Bar in the famous Berlin Berghain club. But if those 2 names ring a bell, it’s because they have also been present at the Music Port Fest which theBasement proudly collaborated with last summer. The two DJ’s brought a whole new magnitude to the festival. Virginia’s voice brought a sensual touch, contrasting perfectly with her high velocity of the bass line and Steffi added melody to her tracks which turned the festival into an epic atmosphere.

“I can’t lose control of cooking in my own kitchen!” – Steffi

She is an American artist from Chicago and she was ranked best DJ of the year in 2016, we now present you iconoclastic The Black Madonna. She plays DJ sets that sweep you across a wide spectrum of electronic music, from techno to disco to house, adding dynamism and fluidity that is always perfectly mastered. Beyond being an exceptional DJ and producer, at the top of the game after years of hard work, The Black Madonna is also known for her remarkable militancy, political awareness, her open-mind towards LGBT, and her involvement in helping women victims of harassment.

And yes! Let’s not forget to cite some of many other house female DJs of today who deserve a shout out. For instance, Australian CC:DISCO! and her boogie feels, American bubbly Honey Dijon mastering cross-genre sets, or South Korean Peggy Gou with her hypnotic shifting to a more acidic style. Three different house music styles, three different atmospheres yet, three incredible missions which are essentially the same: bringing a smile on people’s faces, energy to peoples’ feet, and euphoria in people’s minds.

Luckily, women have since long, been part of the house music scene and it will not end now. Generally speaking, figures keep proving that whether it’s behind the turntables or at the head of a festival, women are less present than men. In spite of that, we cannot ignore the fact that a number of female artists have pierced through that inequality all the way until now and have had to fight a bit harder to get where they are today: to find their place, their confidence, and their voice in the industry and the wider world. Go girls go!